~ Healing rituals for a grieving family

For Nicki Elischer, co-founder of With Love Grief Gifts, it was important to honour the one year anniversary since her grandma died with a do-over memorial that was intentional and meaningful for all those who loved her.

The one year anniversary since my grandma passed was coming up and I wanted to plan a memorial. We had all gotten together right after her death for a big family dinner to celebrate her life, but it turned into a regular dinner – I think because people felt uncomfortable with the grief they were feeling.

So essentially we were planning a do-over but I knew that it would go exactly the same, because my family hadn’t become any more comfortable with the grief they were holding than they were the year before. I was worried that we would feel the same level of disappointment that we had after the first dinner. I knew that I had to show up differently because no one else was going to, but I didn’t know how and I didn’t have the confidence to do it on my own.

I had heard about Be Ceremonial’s app but didn’t know much about it. I wanted to add some level of reverence to the event, but didn’t know what to do. I literally didn’t know where to start, and it felt very overwhelming to think of something new that would take more mental energy. I was worried that my very non-ceremonial extended family would not want to participate, or think it was “weird”. I didn’t know if I could be the one who could lead it.

I was also nervous because I didn’t know what I would find in the App, and I was worried the options would be too “different” for my family. But they were simple and accessible, things that I felt were really reverent and beautiful. As soon as I started going through the process, I could feel myself relax. It would be easy for me to find things that would work.

I chose the Memorial Service ceremony for a group setting, and I selected all the rituals. I decided not to tell anyone that I was doing it until the actual event. It ended up being a really impactful part of the day that helped to shift the focus back to what we were all there for.

The memorial took place in my parent’s backyard where we all gathered for food and drinks. Everyone brought photos of my grandma with them, along with her favourite flowers. At one point, I gathered everyone together and we sat outside in a circle. I brought a bowl full of things that we could each use for grounding, such as crystals, rocks, shells, feathers, and I passed them around the circle so that each person could choose one to hold onto.

I had a bowl of water in the middle of the circle. I passed out heart-shaped pieces of white tissue paper and markers, and acknowledged how difficult my grandma’s passing had been.

I asked everyone to write down anything they wanted to let go of, any pain, or grief, or unmet wishes, and invited them to put the pieces into the water. As soon as the papers touched the water, the marker pen washed away.

Then I asked everyone to share memories that they had of my grandma. My mom and aunt and uncle shared amazing stories from their childhood that we had never heard before, and each of the grandchildren has interesting things to say as well. My sister had brought some handwritten letters that she had found that they had written to each other, and we looked through her photo albums.

It was funny and relaxed and it felt so good to talk about her. Then we walked to the edge of the garden where my mom had planted a flowering tree in her favourite colour, and showed the family where her ashes were kept, along with a memorial stone.

The water release was particularly powerful for this group, because there were so many feelings of grief that were unspoken. The ritual allowed them to express some of the pain privately, and then ceremoniously wash it away.

The ceremony added so much reverence to the day and helped to ground us with intention. I was so worried that it would end up feeling like a dinner party, the way the first attempt had, and it totally would have if it weren’t for the ritual elements that addressed the reason that we were there – which was to remember and celebrate the life of our loved one.

Grief was so difficult for this group that we almost didn’t get there. But I’m so glad we did in the end.

I appreciated the simple and straightforward rituals that Be Ceremonial offered, and it was very affordable. I loved that that whole experience felt very guided. I didn’t have to make too many difficult choices, but was also free to make my own adjustments. I liked all of the different suggestions and began to think of all of the many different ways I could use rituals!

Through this experience, I learned that as humans we can be really good at avoiding pain and discomfort. In the end, the rituals gave us the structure and support we needed to address our loss, and it helped us to pause, pay attention, and honour what had happened with gentleness. It felt very healing.

Browse our ceremony offerings and create your own ceremony, for the first time or as a do-over. We offer hundreds of simple and secular rituals, inspiring you with ideas to make your own. You have what it takes to lead a unique and meaningful ceremony. Sometimes you just need a place to start. 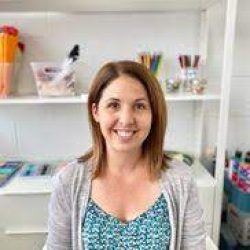 Nicki is an art therapist and child life specialist based in Vancouver, BC. She is the co-founder of With Love Grief Gifts and also a private art therapy practice in Vancouver. She works with children over 8 years, teens, and adults. Art therapy is very helpful for all kinds of issues, including anxiety, depressions, life changes and transitions, and of course, grief.