“We live in this death-denying, grief-denying culture. We are all going to die, and yet we rarely talk about it.”

My first real death experience was when I was in 4th grade. My best friend’s older brother died of leukemia. It was terrifying for me, this idea that as a kid it was possible to die. I became so afraid of death. During summer holidays that year I’d lie in bed, worrying that I would die. I became preoccupied with it and I carried that deep fear into adulthood. Like most people in our culture, I was shielded from what death and dying really was, since it happened behind closed doors. Like with anything, when it’s hidden and you don’t talk about it, this fear develops and grows.

When I was in my early 20s, I volunteered on the 7th floor of our local hospital: Palliative Care. My job was to simply change the water in the flower vases, and it was made clear that I was not to interact with people. I was terrified when I first entered these rooms, but I quickly became drawn to the spaces where people were dying. For me, they were places of deep, palpable peace and beautiful authenticity. All of the things I feared seemed to fall away and were replaced by love. When you’re in the room with someone who is close to the end, the veil is very thin. It’s incredibly sacred. I was astonished that something I spent my whole life being terrified of could be so deeply moving.

A hundred years ago, many families had their dying relatives in their living rooms and they would care for them, even after they died. Children would witness this. The establishment of hospitals and the funeral industry created an unnatural separation from death in our culture, and that has harmed us. There can be so much healing for families that are given the opportunity to care for their people as they die, as well as after they die.  Most people don’t know what their options are, making informed decision making and empowerment more difficult. We live in this death-denying, grief-denying culture. We are all going to die, and yet we rarely talk about it.

I believe we all know how to show up for people at the end of life, we just need to be reminded. I want to empower people to really trust themselves, to trust that they intuitively know how to do this.

I teach the End of Life Doula course at Douglas College and you can feel the excitement people have when we start talking about this taboo subject. We’ve held so much inside and our feelings have been repressed for so long, and many people want to see things done differently. There’s a shift happening right now, a death positive movement that seeks to normalize curiosity around death and encourage people to explore their personal relationship with death without feeling ashamed of doing so. Because it’s been in the shadows for so long, there’s a hunger for talking about death and dying.

People are so worried about being perfect. Perfection limits us. Being with someone as they die isn’t about being perfect; it’s about showing up to be of service, to bear witness, to hold space. It’s about getting out of our heads and into our hearts. Ceremony is so deep in our bones, it’s something we know, yet many of us have forgotten and we are trying to remember. When I witness and support people at the end of life, I see the beauty ritual can bring.

Ritual has become a daily practice. Each morning, I take a set of five elemental breaths, followed by a dedication. I do this before any of my Doula based interactions. This ritual grounds me in my physical body and helps me drop from my head to my heart. It centres me and opens me up so that I can be of service. I also have a release ritual that I do when I need to let something go: I run.

There’s a forest trail by my house that has an old beaten up cooking pot nailed to a tree. It’s always filled with rain water, and as I approach that tree I pick up a stone, big or small depending on what I’m carrying that day, and I drop it into the pot as I run by. It’s so liberating and it helps me stabilize when I’m feeling a bit wobbly.

Growing up, my connection to ceremony was through the church. My mother was a Sunday school teacher and my dad was a doctor, although he almost became a pastor. I felt comfort in the church community – I loved the rituals like lighting candles and singing – but it never felt like a true fit. I would feel envious when reading or learning about the deep rituals and ceremonies embedded in Indigenous cultures. Many of us are flailing here in North America. There is so much opportunity for us to facilitate ritual and ceremony at the end of life, and yet many people don’t know where to start.

For me, this work is a calling. It’s a way to help reduce suffering in the world. There will always be pain associated with death, because pain is a natural side effect of loss. Yet, we create suffering because our culture doesn’t truly acknowledge death as a natural part of life. My wish is that people trust that as human beings we know how to show up for each other at the end of life. I want people to feel permission to let their grief expand, to hold space for ourselves and for others so that grief doesn’t fester. We need to create space for people to grieve more freely, and to live our lives with a deeper awareness that we are going to die. 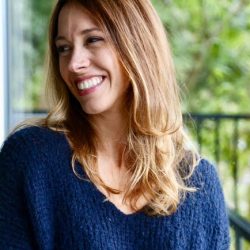 Tracy is energized by doing what she can to increase the quality of end of life care in her community. Currently, Tracy is a practicing End of Life Doula. She also gets deep satisfaction from sharing her experiences and knowledge about supporting the dying by facilitating the End of Life Doula course offered by Douglas College. Tracy is deeply honoured to spend time with people facing end of life and their families at her weekly volunteer shift at her local Hospice. She has taken on a mentor role at the Hospice and is also a member of a group of volunteers who sit vigil for people who are actively dying in local care homes. It is her wish to put this end of life phenomena in a more positive and empowering light and to help prepare people for dying more consciously and peacefully.