Sarah is an End of Life Doula, Pregnancy & Infant Loss Guide, and Community Hospice volunteer in Toronto, Ontario. This is the story of a ceremony she helped create using Be Ceremonial’s platform for a family grieving the loss of a baby.

Recently, I was supporting a family who had a stillborn baby.

I guided them through the experience of building a ceremony using Be Ceremonial’s platform. The parents wanted to create a ceremony that included their two boys, aged 4 and 6. We moved through the ceremony creation process slowly, giving the parents time to sit and connect with each section and choose rituals that felt meaningful and right for their baby and their living children. It was a moving and humbling experience to go through together.

As a family, they decided on a beautiful wooded area with a small brook near their home as their sacred space. This was where they would come together and have a private and meaningful ceremony. They laid baby blankets on the ground, both from their boys and one that had been made for their much anticipated baby sister. They opened their ceremony by holding hands and talking about why they were there and how they were honouring their little girl / sister. A number of conversations had taken place with the boys prior to the ceremony.

Feelings were shared and a most fitting name was decided on by the family as a whole – Brooke. Inspired by one of the rituals presented, the parents had prepared medium sized boats of bark ahead of time and they, along with the boys, filled them with all things magical from the woods where they gathered, paying special attention to what the boys thought their sister would like. Flowers and moss and a few special pebbles were decided upon, and they sang You Are My Sunshine as they gently launched their memory boats into the water.

They stayed a while to reflect as a family, and once ready to leave, they sprinkled more of the pebbles they found into a special spot on the ground so they could return to visit and know where to go.

They stayed a while to reflect as a family, and once ready to leave, they sprinkled more of the pebbles they found into a special spot on the ground so they could return to visit and know where to go.

It was very helpful to break down the ceremony creation process with the mom, allowing her time to process, discuss with her family, and feel out what resonated. It was difficult for the parents at first because they hadn’t named their baby yet. They had a few names in mind, but nothing felt right. They felt guilty that they hadn’t chosen a name for her yet, as that’s what everyone else seemed to do in their minds. During the ceremony, they asked the boys for their input and when they suggested Brooke it was the most fitting name any of them could have hoped for.

The family was incredibly moved and grateful for the ceremony experience I helped craft with them. The mom said she felt lighter, even though she was still heartbroken. She said this helped start a healing process she didn’t think was possible. She said that including their boys was the most special and heart expanding thing they could have done.

Through this experience, I was reminded that knowing what to say and how to support children during these times is never easy. Though we cannot protect them from the loss and pain it may cause, we can play a significant and beautiful role in helping them feel safe, secure, and loved. We can also help them to cope in the healthiest way possible. Seeing these boys embrace the ceremony was so beautiful. 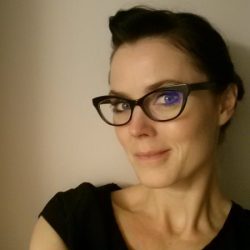 As someone who has specialized training in both fertility and end-of-life care, Sarah looks at life through a unique set of parallel lenses. Based in Toronto, ON, she has supported clients at the beginning of life – and holds their hands during their final moments on earth. Through these unique experiences, Sarah has witnessed the myriad of ways in which people engage with life, illness, death, and loss. She believes that being a compassionate observer to the unfolding of another person’s life is the purest expression of love, which is why she has made the support and care of others her life’s work.

Sarah is an end of life doula, a pregnancy and infant loss guide, and has a certificate in children’s grief and bereavement support. In terms of ceremony, Sarah has found that this is a powerful tool in helping to restore broken order, add momentum to healing, and express the deep, meaningful ways our lost loved ones have touched our souls. She was drawn to the thoughtful suggestions that Be Ceremonial laid out in such beautiful and approachable ways.